Chukotski Racing Siberians was formed in 1998 by the merging of two kennels Chukotski and Kosti.

I first became  interested in the Siberian Husky after reading about them in a book. I liked the idea of being able to do something with a dog rather than just walking it on a lead. From the beginning I was more interested in the working side of the breed than any other. 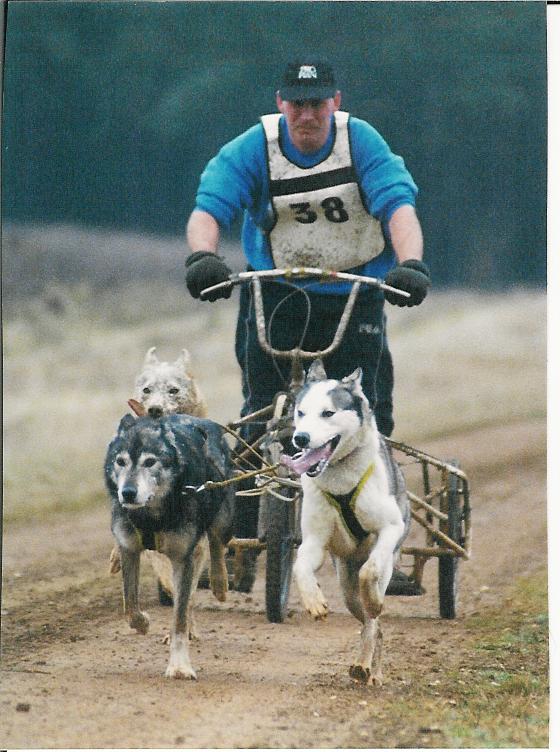 From the original idea I decided to contact the Kennel Club who put me onto the Siberian Husky Club of Great Britain. It was the then secretary Penny Evans who gave me my first contact, Janice and Eddie Loxley.

I travelled from London to Manchester to visit them and through Eddie's enthusiasm of the working side of the breed became even more determined. Janice and Eddie not only had Siberians they also owned Samoyeds and seeing their Samoyeds and learning about the rescue decided to take one on as a family pet. Prince, a rescue Sammy was my very first sled dog, I used to train him to pull a tyre around the local football pitch which he thoroughly enjoyed.

During the early 80's it was very hard to get hold of a Siberian Husky there certainly wasn't the same numbers as we have today and the waiting lists were very long.

Eddie was to give me a more local contact, Chris and Jan Charles who had been in the breed a while but had not really been able to do too much with their dogs at the time due to having a very young family. They offered me the chance to help train their dogs which I jumped at. It wasn't long before I was running their teams and I had made my first rig.

Chris and Jan also introduced me to Jan and Dave Foad (Oleter's) and Sally Leich (Forstal) who were to put me on their waiting list. My first introduction of going out as a passenger was with a 12 dog team, which at that time was an incredible experience and I became totally hooked.

A year later after my apprenticeship, my first race was in the six dog class with Chris's dogs. My own dogs came along in 1985/86 namely Forstal's Magoochi (Magoo) an incredible lead dog, Snowbandit's Kimitzar (Kimi) and Oleter's Tiemy (TM) and a while later Snowbandit's Shiak and Tikchik's Sukhumi who gained her first CC at Crufts under Leonard Pagliaro.

With my own team at their very first race in the 2 dog class we came third and subsequently went onto win the 2 dog at Aviemore which was not a bad start.

The next big jump for the Kosti kennel was in a trip to Canada to visit the Lokiboden kennel (Leigh and Susan Gilcrest). I had the privilege of running some exceptional sled dogs and visited other kennels where I became very interested in the Lokiboden line of dogs.

In 1991 Vista's Amanda from Lokiboden (Lokiboden's Blue Spruce x Lokiboden's Vista Casey) arrived in whelp by Lokiboden's Mr Snuffalupagus. 6 pups were born in quarantine of which I kept 3, Spruce, Spice and Sarah. All three proved to be outstanding sled dogs

During the 1990's I concentrated mainly on the six dog class running my home bred teams. Never being out of the top five which is quite an achievement.

Eight years later I was able to share the love of the sport with my wife Amanda, and with her support and encouragement I am currently training for the IFSS World Dryland Championships in Germany 2006, this will be my first overseas race.

I owned my first Siberian in 1988, Arctictrek's Dyevachka. She was a beautiful grey and white bitch and a typical husky my once well manacured lawns were dug up, the flower beds were no more and my vegetable patch was a complete mush (as was the next door neighbours) and I had to buy a new vacume cleaner once a year due to her hair clogging up my pipes. 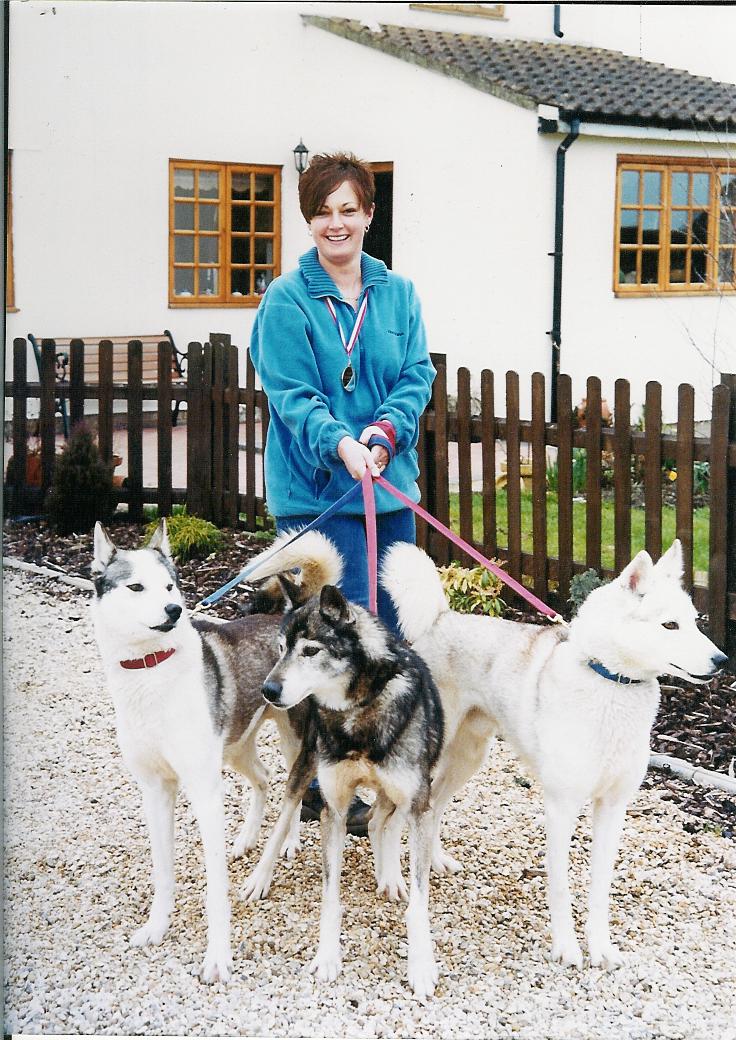 It was two years later when my second husky arrived that I was introduced into the working side of the breed in this country. I soon became hooked  I would spend hours reading every book on the subject and couldn't wait to get to the local forest to give it a try. Sadly Ellie wasn't very keen but Meisha and my GSD Gemma enjoyed it very much. Gemma was to be one of the first Non Pedigree Sled Dogs to run at the ABSA events.

During the weekends I would travel all over the country watching races, dog shows and visiting kennels, and it wasn't much longer before three more bundles of fluff arrived from the Atctictrek kennels and I had my team.

We were never trail breakers but it was credit to these foundation dogs that I am where I am today, they taught me many lessons out on the trail and for this I will always be grateful to them and to Barbara at Arctictrek for breeding them.

Over the next years I was lucky enough to own dogs from Forstal and Kosti and these completed my original dogs. 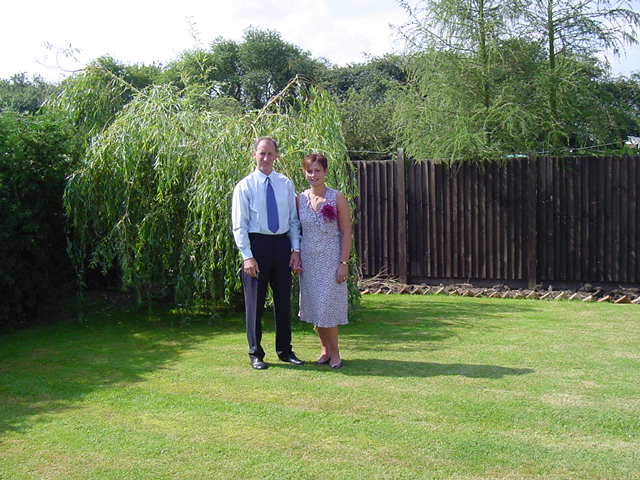 It was in 1998 that we fell in love and combined our hobby and our lives to form the Chukotski Racing Siberian team. We successfully introduced our 28 dogs over the summer break and by the first race season had ourselves a very competitive team. With the arrival of our two daughters Georgina in 1999 and Nicola in 2000 our family was made complete.

Our racing career was to take a bit of a back seat in the first years of us being together with Georgina at the age of six months needing life saving surgery. She was in intensive care for a week and in hospital for three weeks. During this time Fred was left alone to cope with the kennels single handed until the girls return. Nicola has also caused us many a sleepless night as at the age of one was diagnosed as being partially sighted, she is an extremely brave little girl and has a real bond with our dogs, she will never be able to drive a car but is determined to race her beloved doggies.

During the first couple of years together I was to take a back seat in the racing of the dogs, Fred raced the teams concentrating on the 6 and four dog classes at first then in the season of 1999-2000 and 2000-2001 he entered the very competitive 3 dog championship, both years having to settle for the silver medal in a very close battle. These were two very exciting years for our kennel and the boys Spruce, Boz and Nik did us very proud.

The roller coaster ride for our kennel took another turn as in the following season Fred was dragged by an 8 dog team and broke his foot leaving the training and racing to me. I entered the 3 dog veteran championship with the same team and won the gold medal coming 4th overall, a season I will never forget.

Our bad luck continued as in the same year both Fred and I had to undergo major surgery, Fred needing a hip replacement and me needing a cruciate ligament reconstruction. It was during this time that we lost Kosti's Spruz from Lokiboden and when we came close to quitting the sport. It was only due to taking on Khodies Myles,  Khodies Jolt and Ali and Nuka that we regained our enthusiasm. We had ourselves a competitive six dog team what can go wrong now?

In 2006 we decided to breed our fastest race dogs Nik (Forstal's Nachalnik) and Nuka (Nuka Eklutna). and in April saw the arrival of Blade, Nemesis, Rita, Air (Bella) and Hex. We kept three of the pups and close friends Paul and Amanda Keen had Bella and Martin Owen took Hex Man.

In 2006 our team Nik, Myles, Ali, Nuka, Todd and Boz were entered into the IFSS World Dryland Championships in Germany, probably our best team to date we were really looking forward to it when over night my golden boy Nik became ill and died a week later. We can not describe our loss he was an incredible lead dog and not replaceable, Fred's dreams were shattered. Luckily we did have Nik and Nuka's babies, Nik did get to see his little puppies before he died.

Since then we have taken on Khodies Albainn, Khodies Albanach, Khodies Moonrunner and puppy Khodies Neo, we would like to thank the Khodies kennel., Matt and Cara Buckley for letting us have these dogs and for giving us the desire to continue in the sport that we love.

We currently own dogs from all of the major lines in this country, Anadyr, Lokiboden, Seppella and Zero and have always shown an active interest in all aspects of the sport. We would also like to thank the Pawtrax kennel, Steven Lindsey and Fiona Maxwell for introducing us into the realms of open class racing with the arrival to Chukotski of Mini Ken, Soxs, Smudge and Jet our Scandinavian Hounds. Watch this space.