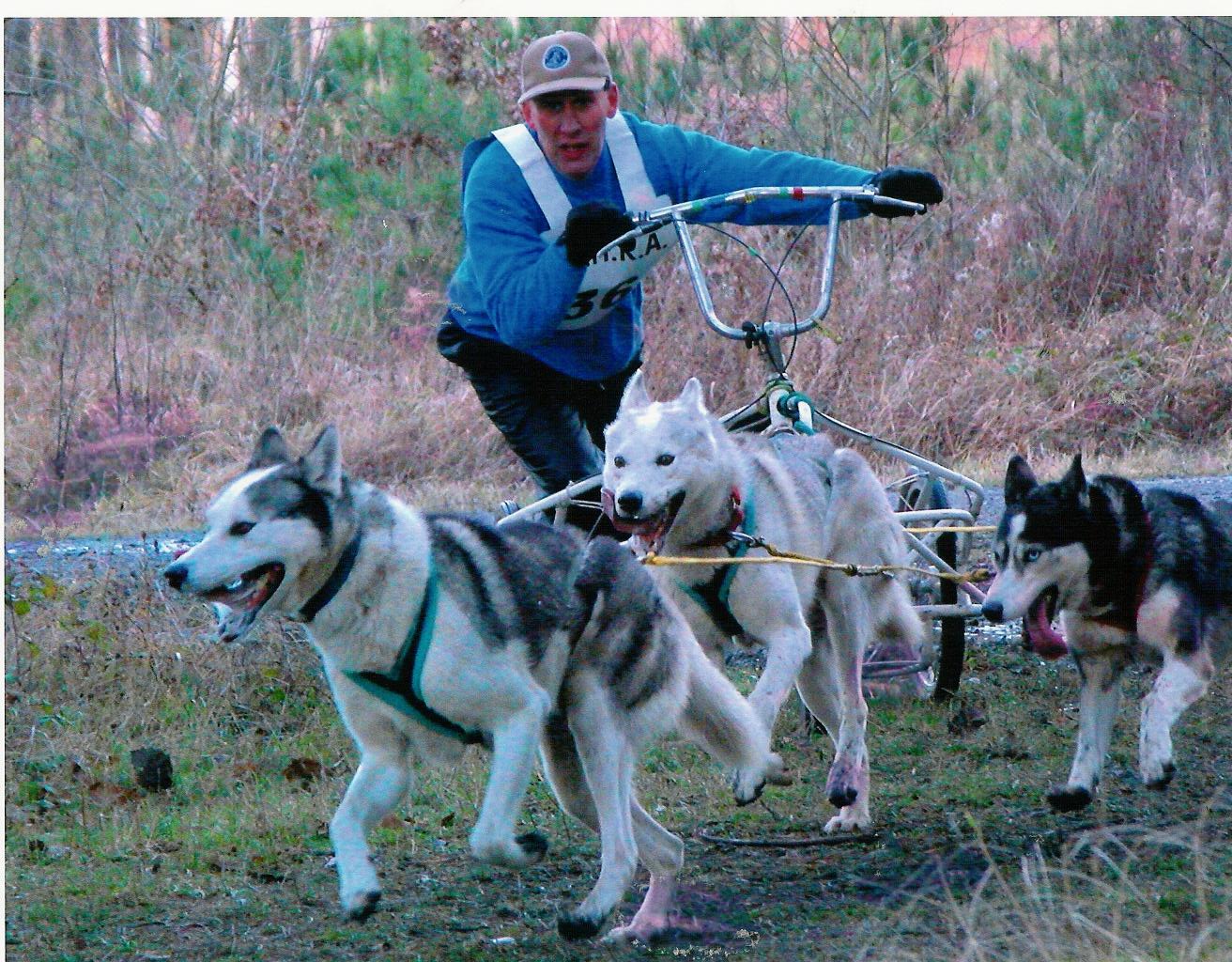 Nik was one of the most incredible dogs we had the pleasure of owning. An outstanding athlete, incredible lead dog and an all round nice character. His last race season he lead the 6 dog team to many a victory and it was probably his most successful season of his career.

Taken ill suddenly in June of this year with total organ failure Niks passing was a real shock for us all. Nik is deeply missed but thankfully lives on in his puppies Blade, Nemesis, Rita and in Apollo, Neo and Jira. 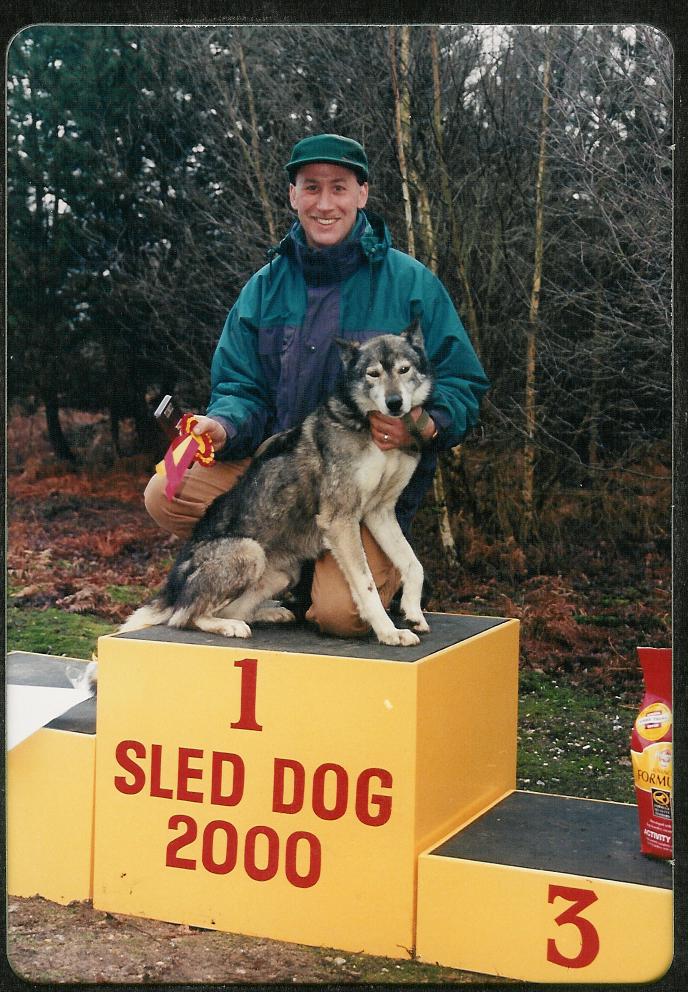 Spruce was a once in a lifetime dog and probably one of this country's best.

Hard driving, extremely quick and an excellent command leader. He ran his final seasons running in single lead in the three dog championship a position which he thoroughly enjoyed and really rose to the challenge. He was a key member in the gold medal winning veteran team of Amanda's in 2002 in his very last race season, we are so very proud of Spruce and all that he has achieved.

In the early days Spruce and his litter sisters Spice and Sarah were an awesome team and are so deeply missed by us all.

Spice is another dog we have found hard to replace, she was an outstanding athlete along side her brother was to win many a race. 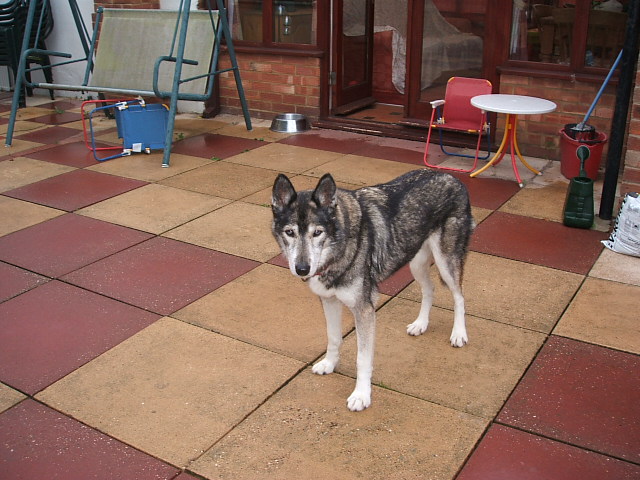 In the latter years she could be found settled on her sofa along side her reunited sister Sitka. We miss them all as they were such wonderful characters.

Sarah was again a phenomenal athlete it was the biggest tragedy for Fred to loose her so very young. Sarah died when she was just two years old. Words can not describe as to the loss he felt at this time who knows what would have happened if she hadn't been taken from him? Jobe has led a very full working life and raced in some winning teams for his former owner. Sadly they were unable to keep him and he came back to us a couple of years ago.

Jobe has suffered a couple of stokes during this time and is slowly becoming very weak on his pins, such a shame for such a young dog. He is well in himself and can boss the younger dogs about if needed, a task which he enjoys.

He is another stunning looking dog, not small but very well put together.

Litter mate to Sal, Mac was a delightful little character and is sadly missed. He had the most georgious blue eyes and was always a pleasure to have around. Taken from us at the age of eight far to young to die.

Billy and his sister Holly Amanda took on when they were one year old. Their previous owners were not able to keep them.

It is such a shame that Billy is predisposed to glaucoma and has hereditary cataracts a double blow for us.

Billy, although relatively young has been retired this season, he is a very strong dog and is missed in the team for his pulling power. Sadly he prefers not to run in harness so I have to be dragged by him on his daily walks.

Billy is a big boy and distance was always a problem for him he excelled in the three dog class which was just far enough.

Sadly Billy was put to sleep today, he had been unwell for some time. We will remember him with much fondness.

Sal was sadly the second of this litter to die and it was a complete shock to loose her without any warning. She was only eight years old and certainly much too young to pass away.

Sal had for the last year of her life had not run in harness due to a serious back injury the previous season, however she did play a very important role in our teams during her short career often leading a six dog team along side her sister Mercedes.

What can we say about Logan, it was an absolute tragedy to loose a dog so young. Logan was not even eight years old when he gradually became very ill with what turned out to be a brain tumour.

During his working career he was our best lead dog trainer and it was he who trained up Nik and Boz. Logan was probably one of the best command leaders we have owned, he could turn a team with a seconds warning.

Logan was shown and although not campaigned as many great dogs are was always very well placed. Such a handsome boy. His daughter Azgard's Kaos is now a champion so at least his name has been carried on.

Kreevanka was a true, hard working wheel dog it was only in his last season that we put him in lead and he thoroughly enjoyed it. It just goes to show how much a dog can pick up being at the back of a team because his turns were perfect.

He was a gentle lad and a real poppet to own, he sired two of Fred's litters both with Vista's Amanda from Lokiboden and was to produce some quality dogs.

Kreevanka was shown in his early days and gained many admirers he was a true gent and is missed by all.. 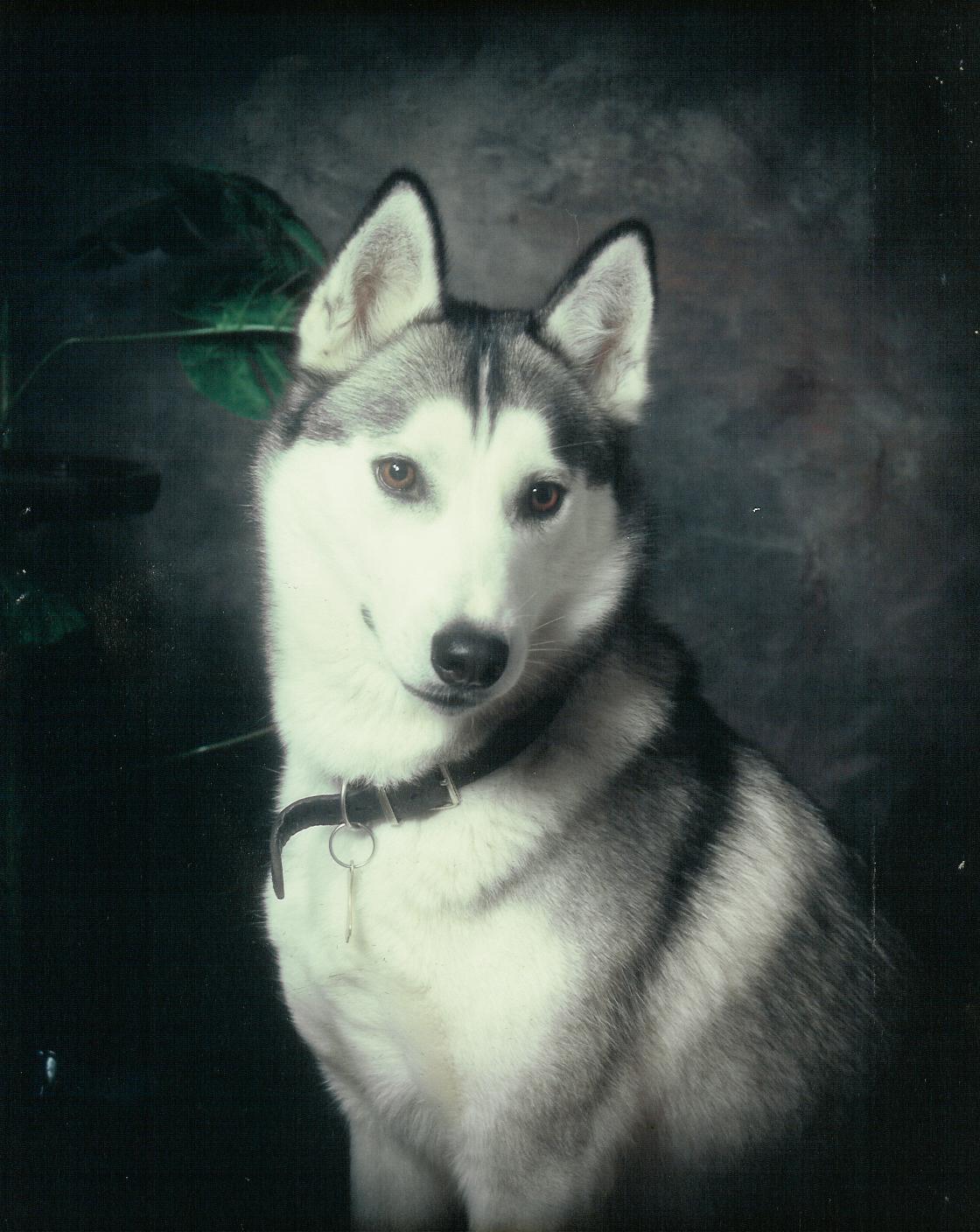 Ellie was Amanda's first Siberian back in 1988. She was bought as a pet and although was put in harness on a few occasions much preferred to watch from the comfort of the van.

She was a lovely little girl and she was to live a long and happy life with us all. 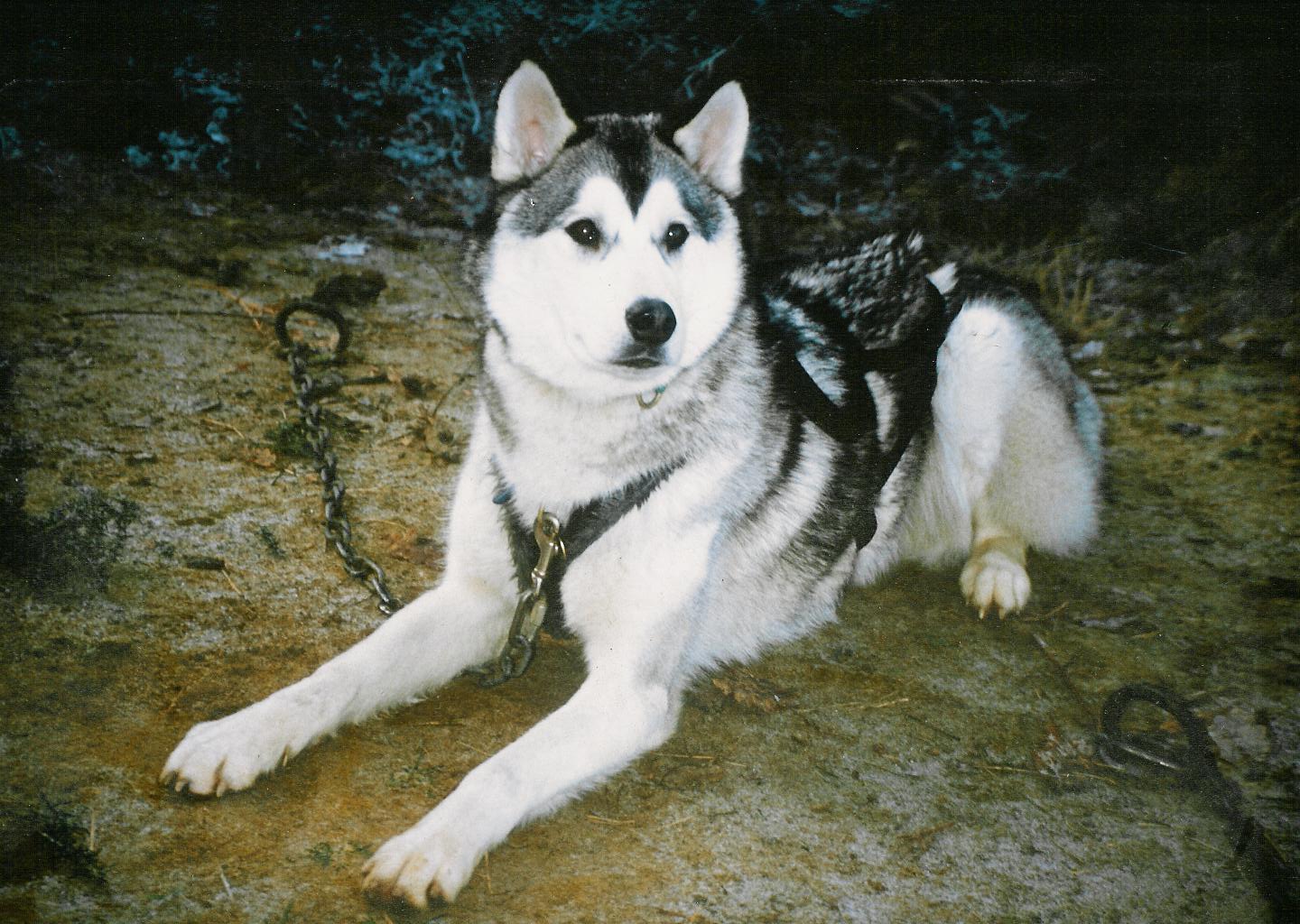 Pacer was probably the biggest Siberian in the world and he had the character to go with the body.

Such a gentle giant he loved nothing more that to shuffle around the trails enjoying the moment. He was never a fast dog but boy could he pull and he was regularly running in Amanda's open team in the early days, we had so much fun together.

Trapper was to have the most squeaky voice imaginable a 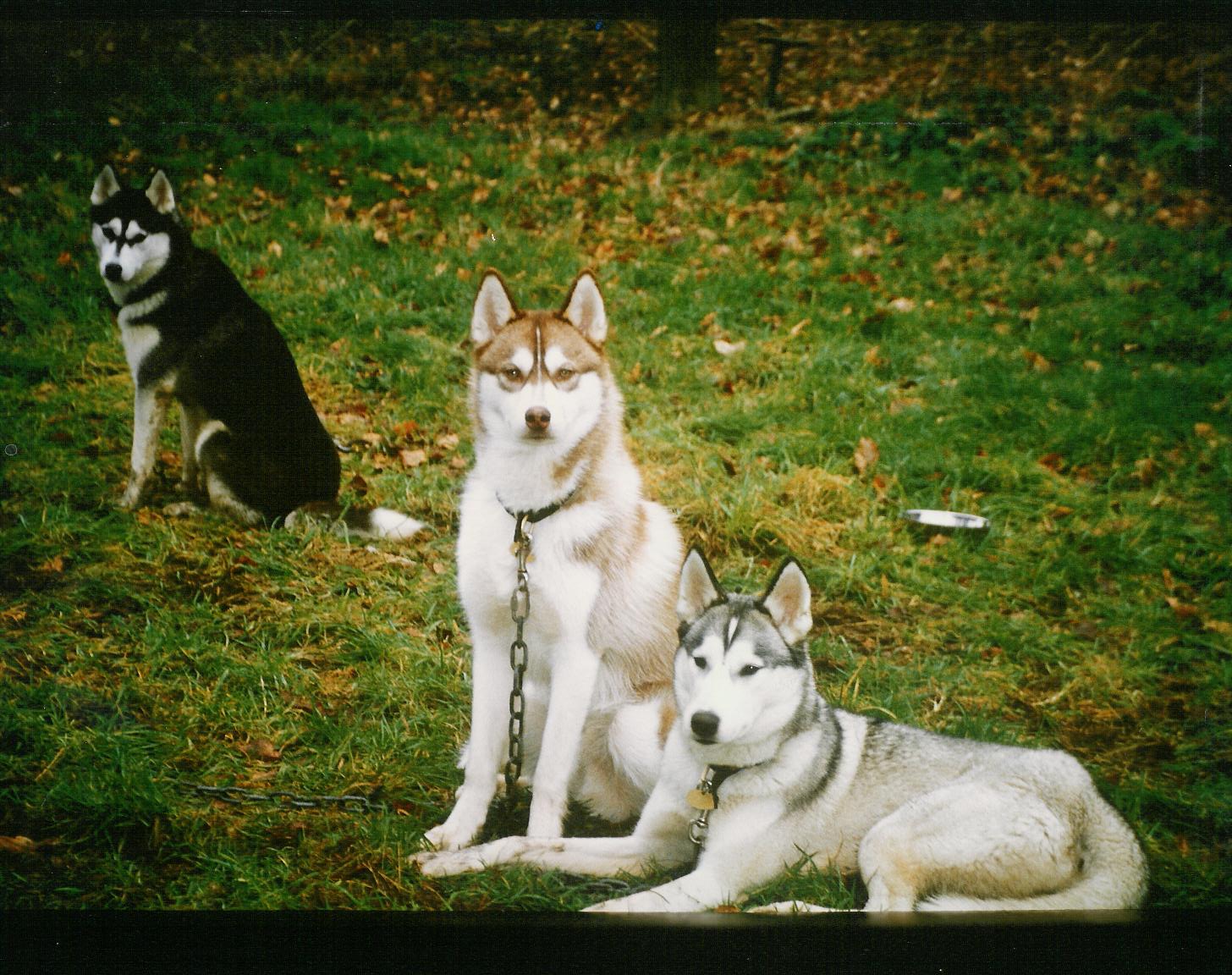 nd he loved to use it to the full. A typical red and white, always interfering and into everything,  living life to the max. Not a bad bone in his body he absolutely loved everyone.

Trapper was raced and shown during his short little life and did well in both, again winning over judges with his cheeky expression and leading the teams with a certain pride.

Trapper too was taken away from us at a relatively young age. 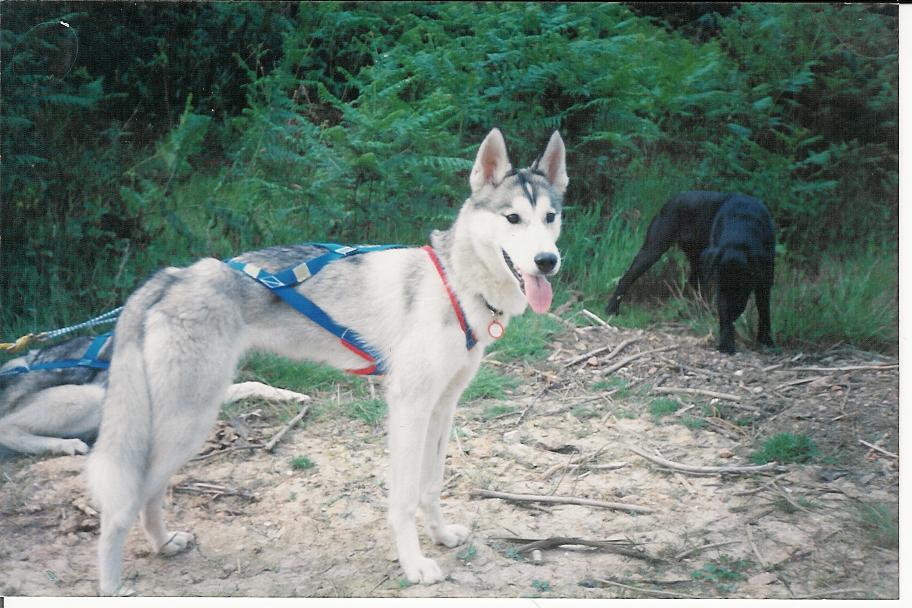 Clarie was Pacer's litter mate, he had the size and she had the speed. Clarie was the turning point in Amanda's racing career and although not an outstanding command leader was to lead the race team for many seasons.

She was a real hot head and liked nothing more than running at full speed.

Meisha was the prettiest little girl I think that I have ever owned and a delightful little character. Meisha lived life to the full and enjoyed everything that she was asked to do, with the exception of coming back when called.

She attended a few shows and seemed to win quite a number of judges over with her cheekiness a real favourite in this household.

Meisha would run in lead and kept Clarie on the right path for many training runs and races.

She lived to a reasonable age and is remembered with fondness.

Gunner was a delightful little character, hard working and very reliable. Poor Gunner was taken from us again at eight years old, he had cancer.